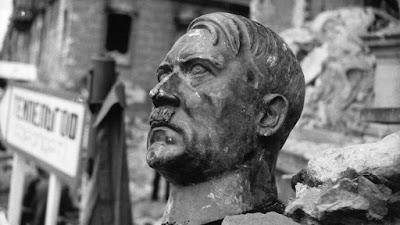 Dense mediation on the life and times of Hitler and his meaning in the world today and over the last 80 years.

Certain to swallow you up THE MEANING OF HITLER will overwhelm you. A steady stream of question and answers attempts to find a meaning, a reason and put into context the man who has hung over the better part of the last century of history. Its a heady stream of thoughts and ideas spewed out via an unending line of talking heads and film clips.

I honestly don't know what I am supposed to take away from it though part of it is we are being directed to see the late Adolf mirrored in Donald Trump. I say this because the film barely started when the connection is made for us. I'm not so sure that's the wisest thing to do since the people who need to hear that are going to shut off before the point comes round again.

This film is going to over helm you. So much is thrown at you that you barely have time to process anything. I had to stop the film once or twice to catch my breath. I also had to stop it so that I could unpack everything it was saying and simply try to see how much of it actually fits together.

On that last point I'm not so certain it manages to pull it all (or any?) together. In trying to discuss Hitler it has thrown way too much at us. Not just facts but ideas, things that don't full fit together are dropped in our lap and we are asked to make sense of it. It would be fine except, as I mentioned above the film never stops and as a result ideas get lost. I wasn't sure what was covered and what I made connections to on my own.

I applaud the fact that this maybe the headiest film I've seen all year, but I have to cut the cheers short because this like being bowled over by a tidal wave.

While I am withholding any real discussion of the film until I can see it three or four more times and can get a handle on it, I will recommended to anyone interested in the subject with the warning you probably will feel overwhelmed.