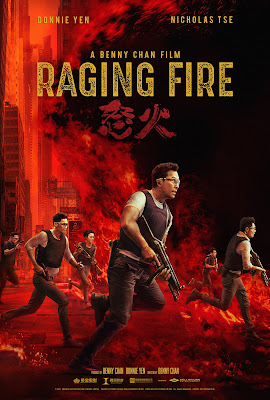 Cop Donnie Yen plays a deadly game of cat and mouse with a former partner tuned psychotic bad guy. As the bodies pile up it becomes a question of if anyone in the city will survive.

Let me get this out of the way- RAGING FIRE is a killer action film with some of the best fight sequences in Donnie Yen's career. It a film I wish I had been able to see on the big screen. Its gripping in a way that most recent thrillers are not and its a film I want to share with friends because it is so damn good. Seriously this film will blow you mind.

The set pieces, such as the shoot out in the mall, the various chases and Donnie Yen taking on an army of bad guy while trapped in a small room will make your eyes bug out and you jaw drop. The fights here are some of the most impressive I've seen. They are a reminder of what we lost with the death of Benny Chan. If he wanted to go out on a high note this is it.

If you can get to see this in a theater do so. You will be absolutely delighted. This is the sort of film that I missed seeing on a big screen.

That said the film presents a moral and political problem in light of the protests and ugly police behavior in Hong Kong.  I say that hoping that Benny Chan and Donnie Yen intended this just to be a balls to the wall action film, however watching the police hassle people in the name of "justice" in the early part of the film is really tough to watch.

If you don't know what I mean watch scenes of police misconduct in Hong Kong in Hong Kong and watch how the scenes of police raids and police striding through the streets in the first third of the film, they mirror what is actually happening in the city. Also explain to me how the film does not excuse police violence in the furtherance of justice. It seems to be saying cops can do really ugly things if its for a good cause.

Yes, I am probably reading too much into the film, but I shouldn't be reminded of the bad things going on in Hong Kong. Additionally the fact that the Chinese government has cracked down on freedom of expression, and nothing gets made unless they approve of the message makes me suspect they see some good in this film. Perhaps its just an example of bread and circuses for the masses to distract them from the violence or make them expect police violence or perhaps they see it as a political tool in some other way.

I wouldn't care but the folks at New York Asian have been smart enough not to program anything remotely political so questions wouldn't come up, thus allowing them not to have to answer questions about Chinese government abuses (something they haven't done despite being asked by a couple of other outlets). The Hong Kong  and Chinese films that programmed by NYAFF the last few years have been unpolitical in the extreme (they seem to be the only major festival not to screen any film remotely questioning anything anti-Beijing), but intentionally or not in light of the ongoing protests and crack downs RAGING FIRE can make for uncomfortable viewing for the politically aware.

RAGING FIRE is the Centerpiece of NYAFF, is a special screening at Fantasia and  hits theaters Friday August 13