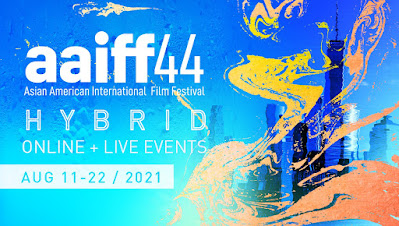 The great Asian American International Film Festival starts Wednesday and based on what I've seen this is another magnificent year. That means they have pretty much have a near perfect record of 44 festivals. I've been covering the festival since I started Unseen Films and enjoyed the hell out of it every year.

AAIFF is actually one of the best fests you will run across. It a beautifully programmed fest that has some of the best films from all of Asia mixed with the best works from Asian Americans. I say this because unlike other Asian oriented festivals AAIFF will dip into the works of South Asian countries and other lesser represented countries.

And lest you wonder about the films they program they are all top shelf ones with their opening night film, the "kill to get a ticket it's so good" thriller SNAKEHEAD programmed to play next at the Toronto Film Festival.  What this means is go see the film at the festival so you can talk to your fiends about it before it rocks the pillars of heaven when it plays Toronto. My review will run in a day or so- but you do need to see it, more so if you've ever been in New York's Chinatown. I say that because the film has a tactile quality to it that will make you flashback to being there.

And lest you think you can't experience AAIFF because you're not in NYC, the fest is hybrid with some films screening on line. (Buy tickets here).

To help you decide what to see here are some links to the films we've previously reviewed. All of them are worth tying - with TAIPEI SUICIDE STORY being ne of the best film I've seen in 2021

Reviews will start to drop shortly- so for now just go here and pick out some titles to see- odds are you will not be disappointed.

Email ThisBlogThis!Share to TwitterShare to FacebookShare to Pinterest
Labels: AAIFF 2021