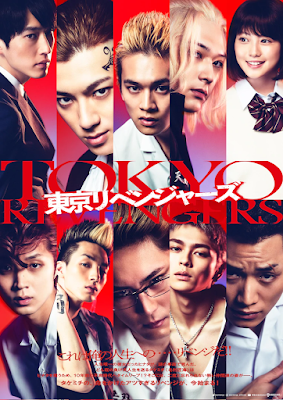 30 year old loser in a dystopian present where Tokyo is kept in fear by a street gang battling the yakuza, tries to get through life after discovering the only girl he ever loved was killed in a violent clash.  Unexpectedly  he suddenly travels back in time, to the moment just before the fateful day when he was beaten up and sent on a down trodden road. Refusing to follow the course of history he makes some changes before being thrown forward again into a changed present. Discovering that he is capable of jumping back in time he sets about trying to change the past in order to save the life of the girl he loves

When I started Tokyo Revengers I had no idea that the film was based on a manga running in Shonen Jump. I went in blind to see it because it looked cool and because the film was playing Fantasia, which meant that the film was vetted by a high authority. However ten minutes into the film I could feel the chapters opening and closing around me. Frankly as good as this film can be the back and forth nature of the story would have been better as a series.

The problem with TOKYO REVENGERS as a film is that the back and forth nature is one note. For much of the early part of the film each jump back results in his getting the shit kicked out of him. The difference is that even though he knows he’s going to “lose” his standing and refusing to give up somehow alters everything around him.  Its interesting to a point, but at the same time it is a bit too reputative. It also doesn’t help that there have been other similar stories that point us toward how this is going to go. Worst of all the time limit of 115 minutes limits how detailed we can get in setting up the numerous side characters.

I need to restate I don’t dislike this film, I just think a feature film does a disservice to the source material.