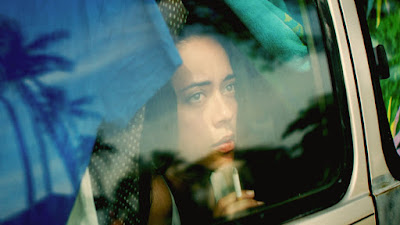 Dark, almost film noirish film about a dancer living in a van who runs over a homeless guy and has her life turned upside down.

Heady examination of life in Hawaii, the clash of cultures, history and life itself, WAIKIKI is a dark ride to the subconscious. This is one of those films that grabs you and drags you along a dark and unpleasant road and forces you to consider much of what you know.

I really liked this film a great deal. The point where I realized just how good the film was in it' use of "happy" dancers dancing for tourists which is counterpointed with the miserable life f the dancers themselves. Where the notion of culture being mined for money has been used in a couple of other recent Hawaii set films and TV shows, this was the first time where it felt right and on target. I say this because the notion is kind of an easy point to make and the other films used it lazily, however WAKIKI actually builds off of the notion to say more. It is also the only one that uses it while remaining wholly focused on Hawaiians.

While not for everyone, WAKIKI is a kick for those who are willing to go with and work with its view of the world.