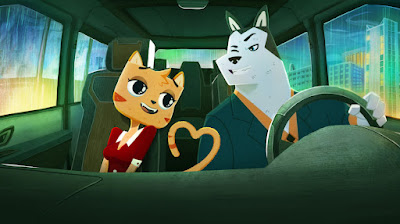 Nimfa is a perfume sales person who is supporting her sister and mother. She also has a big hunky boyfriend. Things become complicated when she begins an affair with a super rich executive.

Despite looking like a Disney animated film this soap opera is not for the kids. While it is very much a comedy I don't think most parents are going to want to explain all the frank sex talk to their kids. I say that up front because I went in expecting something less raunchy and violent.

Sex and adult matters aside I had a good time with HAYOP. I laughed in all the right spots and could relate to the frank discussions of inter-personal relationships. Its not so much that we don't get this sort of discussion in an animated film but there are few films (though there are plenty of TV series) that are this free with their discussions.

While I enjoyed my time watching the film, I'm left pondering if this would have worked as a live action film. I'm not so sure. I think the flat 2D animation, which is gorgeous, helps the film and lets us forgive the film its many flaws. There is something about watching an animated film that allows us to forgive imperfections.

I had a good time and I recommend it for an adult audience.