A Fire Within (2021) Bentonville Film Festival 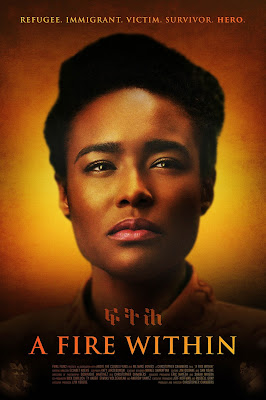 This is the story of three woman from Ethiopia living in Atlanta who discover that the man who tortured them 15 years earlier was working in a hotel with them. They then set out to get justice for what happened by suing him in Federal Court.

Deeply moving film is one of the best films playing the Bentonville Film Festival. It is a very tough watch as the torture is graphically described, however it makes the ending of the tale all that more triumphant.

Make no mistake about it I got teary several times during this film as the words of the women moved me.

What makes this film work is it's insistence on making damn sure we understand the history of Ethiopia and how the Red Terror came about. Everything is put into context, including how the blind torture of everyone of every age was destroying the country as people turned on each other just to make the pain stop. I had a tiny bit of knowledge going in, but this film really put it all into context.

I don't know what to say.

This is a film that speaks volumes not only about what happened but the danger of unchecked political terror. Its clear torture doesn't work and only pleases the sadists who inflict it.

A FIRE WITHIN is a must see.