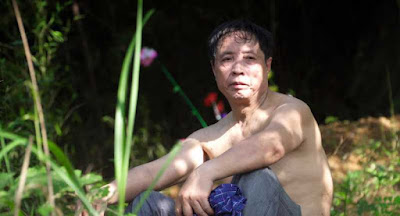 I am going to be brief in what I say about this film because it kicked up a lot stuff for me. I stuck it out but this films echoes into my own life made this film an emotional rollercoaster since I am still dealing with fallout of my father’s passing a year ago.

Father is Den wei’s portrait of Zuogui an aging father, His son Donggu is property developer he doesn’t much care for.  Blind since childhood he goes through his life, telling fortunes. When Donggu has financial problems the chance to reconcile arrives.

It’s a tough watch as we watch the ups and downs of his life. We see the clashes of family up close and personal in an unflinching way. Very quickly we are made to feel as family.

So much of this film hit home for me. Little bits and pieces echoed around in my head as I replayed conversations of the last couple of years.. I was rocked. A late in the film where Zougi told his son to show the film at his funeral and maybe he would cry hit me like a ton of bricks.

This is a great film and a vivid portrait of life as lived by some of us.

Highly recommended when it plays AAIFF