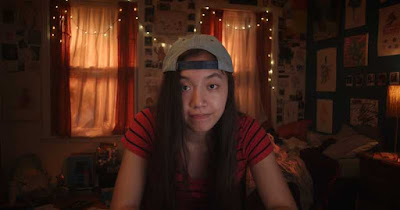 INBETWEEN GIRL is a sweet little film. In some ways it’s nothing we haven’t seen before, but at the same time the shading makes it worth seeing.

The plot of the film has high schooler Angie trying to get through high school. Because she is the only Asian in the school she is the otherwise white school’s effort at diversity. When her parents divorce she becomes slightly untethered misbehaving and having secret hook ups with Liam, who she sweats he doesn't like.

Lest you think this is a heavy drama, it’s not. This is a good time with good people. We pretty much like everyone we see.  Over the course of the film we see that everyone isn’t perfect nor one note. There is range to everyone. I say that as high praise since too often similar films the characters are not well rounded. To be certain most don’t arc. Here there are little arcs  for a number of people.  I appreciate that the filmmakers actually took the time to do that since it lifts the whole film up to be something other than run of the mill.

I had really good time watching this. Normally this sort of film isn’t my cup of tea but because AAIFF is so well programed I decided to go for a film that was out of my comfort zone because they programmed it. I’m glad they did.