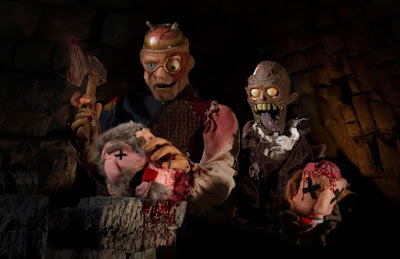 FRANK AND ZED is a horror/fantasy film made entirely with puppets. Its the story of two zombies living in a castle taking care of themselves. When a king decides that he wants to stop ancient prophecy he unwittingly sets it in motion.

Seven years in the making, this is a bloody film filled with puppet carnage. Its a film where that manages to blend laughs and gross.

I have been chasing FRANK AND ZED for a while now. It's been at several festivals but I missed it each time. I love puppets and I love good fantasy and this looked like it melded the two.

Unfortunately I was a bit disappointed by the finished film. Part of my problem with the film is a dislike the design of the puppets. While I wouldn't have minded them in straight on comedy in this mix of horror and humor it works against both. I also wasn't thrilled  with the cramped sets. Yes I know its the nature of performing with puppets, but its way too cramped for a film.

However the real killer here is the pacing. This film goes on much too long. Director Jesse Blanchard was so in love with what he was doing that sequences run long.  Other bits seem to be there just because "it would be cool with puppets". I tuned out.