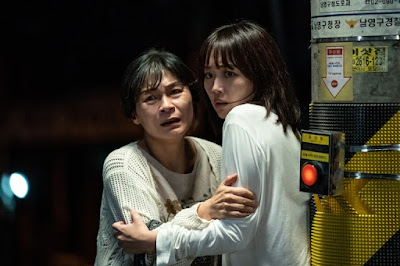 A deaf woman stops a serial killer from killing his latest victim thus putting her (and later her mother) on the kit list.

On it's own terms MIDNIGHT is a pretty good thriller. Once it gets going it just races to the end.  If you don't think about it it's an enjoyable evening.

The trouble for me is that as good as much of this film is, the film falters when then it comes to your killer. A cinematic serial killer shouldn't look like a killer, but this guy does. Yea, he is a scary guy, but the truth be told he's only scary because the filmmakers keep helping him.  From the opening killing when the killer tries to get a young woman on a phone into his car, and she walks away-only to go WTF-ly go back  because  its the only way the writer can have her killed, he never really manages to get anything done except when helped by a the writers  turn. (I mean hat first victim, clearly knows something is wrong  and still walks back to his car) Later twists  are clearly there just to keep things going.

The real problem is that everyone, especially our heroine, is light years beyond the killer at the center. I mean, everyone is smarter than him. (And  all the characters all are better drawn). He's such a moron, that almost instantly we realize that the suspense in the film isn't whether our heroine will survive, rather it's how is she going to best him.  I was watching this to see how she killed him.

While I was disappointed, I did have some fun and for that reason MIDNIGHT is worth a look.