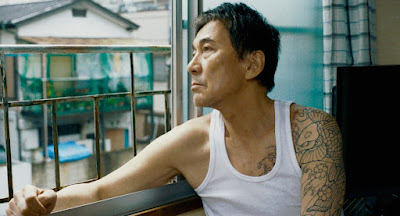 Under The Open Sky is hands down one of the best films playing at New York Asian and Fantasia Film Festivals. It is an absolute must see.

The story of Mikami, an older yakuza soldier who gets out of prison and wants to go straight is brilliant reinvention of the genre. It’s a real life examination of the struggles a recently released prisoner faces colored by the fact that Mikami is opening up to a writer who is hoping to make a TV documentary on him. It’s a film that faces the struggle of growing older, reconnecting, trying to find one’s place in the world and hoping to maintain some sense of sense and worth and not rely on the system

I was moved to tears.

That the film works as well as it does is due to the cast. It’s a brilliant collections of actors, especially Koji Yakusho as Mikami who wins us over and works his way into our hearts.

If there is anything wrong with the film is that I’m not certain that the film earns its ending. I say that because despite having a sense at the opening how it would end, the rest of the film is so wonderfully marvelous unconventional and unpredictable, the fact that I knew the ending disappointed me. Don’t get me wrong I was properly moved by it, but this otherwise masterpiece.

Slight disappointment aside this is an absolute must see.