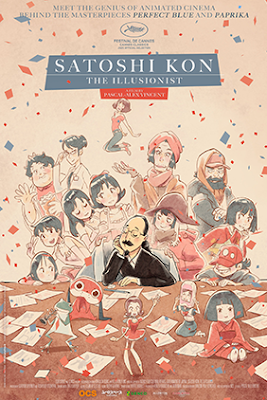 A look at the work of director Satoshi Kon who left us some manga, a 13 part series and too few feature films.

The film at the top of my Fantasia must see list disappointed.

Not that it isn't a solid discussion of his films, which it is, rather it doesn't tell us much we already didn't know. If you've seen his works (PERFECT BLUE, MILLENIUM ACTRESS, TOKYO GODFATHERS, PARANOIS AGENT, PAKRIKA) you'll have deduced much of what the talking heads are saying. While you may not have caught the reference in Darren Arnofsky's REQUIEM FOR A DREAM or made the connection to just how influential PAPRIKA is to SPIDERMAN INTO THE SPIDERVERSE if you love film, you've seen Kon's films infect everything after them. We know a lot of what the largely dull talking heads are saying.

The other huge problem is there is zero sense of the man. Yes he was prickly, but what beyond that? Nothing. This is a film focused almost exclusively on the cinema work the result the work kind of falls into a vacuum. A revelation that the girl at the center of PERFECT BLUE is Kon doesn't really say a hell of a lot abut the man and the rest of his work. We never get a sense of who Kon was and how his films came from him.

I was disappointed because other than celebrating Kon's films there is no "ah ha" moment, no grand, or even gentle, revelation about the man and his work. There is only the work with no connection to the an and no sense that anything anyone is saying about it is what he felt about it.

Its a film about Satoshi Kon where the man himself is entirely missing.

Recommended for fans only.