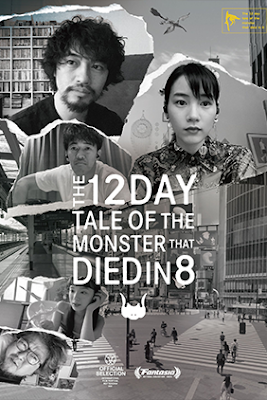 The film begins with title saying covid kaiju and in a weird way it is...

And it is not.

This is the rare zoom film that (mostly) works. Its a series of conversations between Shinji Higuchi various people including SHIN GODZILLA director Shinji Higuchi who lays out a crazy alternate history when monsters attacked every week. The discussions are related to tiny capsule monsters which are supposed to fight covid. Its a weird and entertaining series of conversations.

The trick to enjoying this film is to just go with it. its loopy, but its played absolutely straight which allows us to buy the loopiness. I was smiling from start to finish but I love this sort of stream of consciousness nonsense. A footnote film, but a fun one.

To be honest the film is a bit too long for what it is, but considering its so well done. I didn't mind.

Worth a look for anyone who wants to see a one of a kind film.