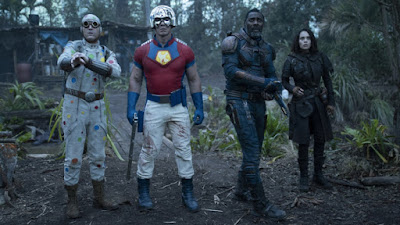 James Gunn revisits the unpleasant world of SUPER but this time with a joke in his heart making the resulting film completely and utterly pointless. Where SUPER made us think about what superheroes would be this is just blood, curses and nothing else

The bare minimum plot has two groups of super villains going to Corto Maltese in order to destroy the a super secret alien project.  Neither group knows about the other one being a sacrificial diversion for the other this wipes out many of the characters in the first ten minutes. The survivors then play rescue games with each other before going on the big mission which involves fighting a giant alien starfish.

There is no logic, reason or suspense or any of this. Rather there is just lots of the use of the f-word (as if its a badge of honor), Haley having sex (Margot Robbie said she want to step away from playing Haley- is this the reason?), endless macho posturing and endless cruelty and violent death just so we can laugh at it. It's so bad that that they turned Amanda Waller in to a psycho cartoon.

While sporadically entertaining (some moments work) this is a complete waste. It looks like the plotting of a creepy kid playing with his action figures in his basement. Most of this feels like the work of a stunted writer trying to please the worst part of comic fandom. In other words like DC told James Gunn, please the basement dwellers who hated Marvel's CAPTAIN MARVEL without ever seeing it.

Even worse this is really badly written. Nothing, really nothing, makes sense. There is no character development, the plot is not a plot but set pieces and everything exists not to move the story (oh right there is no f-ing story) but rather to make an audience react. That's nice the first time through but the second or third time there is no reason to watch.

What can I say about this film when the most interesting and developed character is a CGI rat wearing a backpack? Seriously everyone else are not characters but one or two line statements of a trait. (One hates his mother, another can sleep through anything, one is dumb shark god, ect)

And before you ask there is no point in comparing it to the comic because unless the comic has changed since I was reading it, it was never this puerile. I say that because the comic didn't exist to just kill off all its characters.  Honestly even if I wasn't a fan of the comic this movie would be  mess. Actually it would be worse since we would have no idea what it is trying to be.

I so want to call the film a certain R word that the PC police say is bad, but is perfect for this film, especially since I'm not aiming this at human being.

What an absolute waste of my evening.

Email ThisBlogThis!Share to TwitterShare to FacebookShare to Pinterest
Labels: action, comedy not worth the effort, comics, fantasia 2021