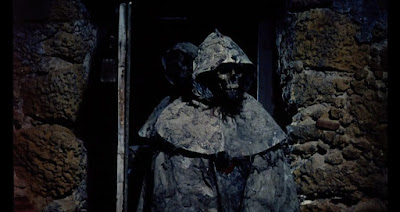 First in a series of dreamlike horror films about the resurrected corpses of the Knights Templar who were blinded but still ride forth to kill the living.

I have a half finished piece on the whole series, but if you've never seen this film you must. Yes it can play silly, but there are definite chills as the Knights keep coming in some the most frightening monster sequences ever put on film.

I love the film and the ones that follow, even when they don't make any sense. They never were supposed to and play like a really bad nightmare made real.