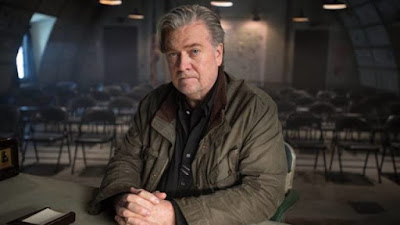 Errol Morris sits down to talk to Steve Bannon about his life, politics and movies.

Infuriating portrait of former Brietbart editor and Trump adviser Bannon will have you talking to the screen. At the press screening I attended numerous people talked back to the screen on numerous occasions. Morris lets the man talk and explain himself and the result is a film that is much grayer than anything you'll see in any of the news reports you'll see.

I went into the film absolutely despising the man,  but kind ended up giving him some respect for what he says he is trying to do. The problem is he  really never explained how he was going to achieve it. Worse, Morris never specifically challenged him as to why if he was for the little guy he was on the side of big business and modern robber barons like the Koch brothers.

As a film on it's own terms it is good but nowhere near great. Morris' presentation is too scattershot and unfocused to completely work. There is no progression simply just allover the place discussion. Its interesting but never wholly satisfying.

I don't know what to say beyond that. Any decision to see the film is going to have to be based on your own personal views and not really the quality of the film
Posted by Steve Kopian at November 01, 2019