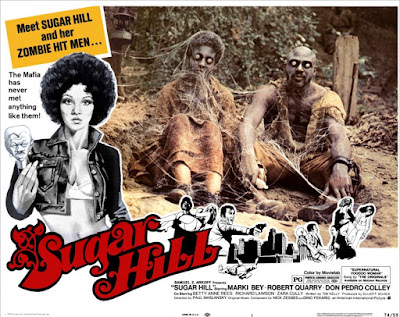 Paul Maslansky’s Sugar Hill is ninety-one minutes of blaxploitation catharsis—pure, unadulterated, unapologetic catharsis. The film doesn’t have a plot so much as an inciting incident followed by sequences of increasingly brutal comeuppances.

The set-up: after her boyfriend Langston (Larry D. Johnson), a Houston nightclub owner, is murdered by the goons of white mob boss Morgan (Robert Quarry) after refusing to sell his business, Diana “Sugar” Hill (Marki Bey) forms a pact with voodoo lord Baron Samedi (Don Pedro Colley) to get her revenge on Langston’s killers. The traditional narrative connective tissue one expects in such a story is conspicuously missing—at no point does Sugar struggle over her decision, and neither does she go through a crisis of faith over whether voodoo is real or not. In one scene she’s mourning Langston’s death and in the next she’s in the dilapidated mansion of a heretofore unestablished acquaintance—former voodoo queen Mama Maitresse (Zara Cully)—seeking to summon the god of the dead. Samedi himself barely flinches at her request, eagerly agreeing to wreak her vengeance on whomever she wants, even laughingly refusing her offer of her own soul as payment. (If only all murderous deities were so chill about infernal payments!)

Barely twenty minutes in and the film is off to the grisly races, establishing a pattern Maslansky clings to for the rest of the runtime: Sugar confronts Morgan, picks out one of his henchmen, sics Samedi on them, and shows up at the last moment before their deaths to rub their just desserts in their faces. (In a genius bit of costuming, during most of her scenes Bey wears her hair straight or pulled back under a scarf. But during the revenge sequences her hair is always puffed up in a natural afro.) This rigid structuring is straight out of the slasher playbook which would only reach final codification later the same year with the same-day releases of Bob Clark’s Black Christmas and Tobe Hooper’s The Texas Chainsaw Massacre. But with its focus on Samedi as an unstoppable, magical killer, it predicts the rise of supernatural slasher icons like Michael Myers in John Carpenter’s Halloween (1978) and Jason Voorhees in the Friday the 13th series.

It’s a shame the film never received any sequels, as Colley’s Samedi is exactly the kind of over-the-top, deliciously evil monster that could prop up an entire franchise.