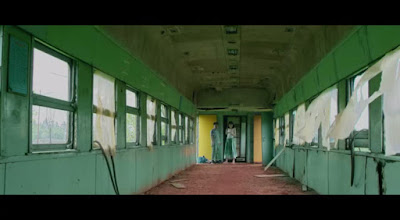 A gambler tries to take his wife Sha Tao to his boss so he can use her in a ghost marriage (you marry a living erson to a ghost to calm the dead) while paying off  his debt and getting money for his mother's cancer treatment. Things become complicated when he needs the money sooner than later.

This is probably the best looking film at this year's Brooklyn Film Festival. A gorgeous film that looks and moves unlike any other. The film is full of all sorts of technical delights.

Unfortunately I'm not really certain what I think of the film beyond that. The plot often seems to drift into odd permutations and there is something kind of skeevy about portraying Sha Tao as a mentally handicapped young girl that kind of borders on the offensive. Forgive me something about the whole thing didn't sit well with me partly because it feels contrived and partly because it just feels wrong.

While there is nothing really wrong as such and it looks spectacular, I was deeply troubled by the film for the wrong reasons and as such I can't recommended it
Posted by Steve Kopian at June 04, 2020