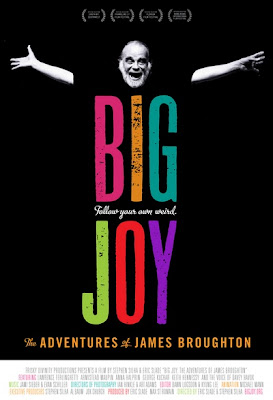 Get your weird on

Big Joy is just that- a big amount of joy.

The arc of the life of artist, filmmaker and poet James Broughton is one of the happiest most joyous films of recent vintage, it’s also a must see film on Ovid.tv.

Enough superlatives, you’re probably wondering who Broughton is and why should you care. Broughton was a poet and filmmaker who was a key figure in the San Francisco Renaissance that predated the Beats. He then became friends with many of the Beats, and made Avant Garde films that helped define various periods of history (his film The Bed with an entirely nude cast opened the door for cinematic nakedness). He fathered three children, including one with Pauline Kael, before finding his soul mate in Joel Singer.

While there is no doubt that the film will be embraced by the gay community where Broughton was a prominent figure, the film is too good and too important to be pigeon holed as simply a gay film. Actually despite the fact that Broughton had romances with several men the film doesn’t treat it as anything part of life. Broughton found love and a soul mate, it just happened to be with another man, so what big deal. Happiness is happiness regardless of sexual orientation. While the film does discuss the difficulty and closeted nature of being gay in the 40’s and 50’s, the film rightly doesn’t focus on that and instead focuses on Broughton being Broughton.

The reason the film works so well is Broughton was such a funny joyous man.  He was full of life and living and being alive, and when he was in dark places he was always looking for a way to the light. Watching him have a good time is so much fun that you’ll wish you could have spent time with him.

If the film has flaws it’s that the film doesn’t deal with all aspects of his life as deeply as it might have. His relationship with his children is glanced over (His son says he wasn’t a bad father so much as he was never home. His two daughters refused to be interviewed) and there are some things mentioned in the press notes that aren’t touched on in the film . On the other hand this isn’t a typical biography but the arc of Broughton’s path to joy, and as such some details can’t be covered since they go off that course.

Flaws or no the film made me smile and laugh and most importantly feel damn good. (Stay through the end credits for some nice laughs). It’s a film that manages to make its subject not only come to life but remain alive in your heart and mind long after the film ends.

And remember- Twirl whenever possible
Posted by Steve Kopian at August 08, 2021