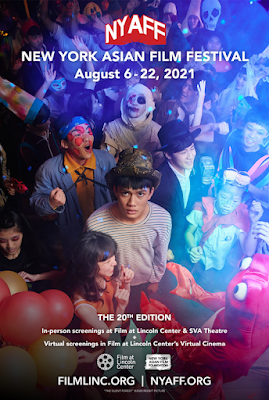 The New York Asian Film Festival Starts this week and I am absolutely swamped with films. It’s not that there is just NYAFF this week but also Fantasia and Bentonville. I am so awash in films from the three festivals (plus festivals from the middle and end of the month) that I didn’t have time to prepare a proper Curtain Raiser.

If you’re a long time reader of Unseen you understand that this is one of the must attend festivals of every year.

This year the festival is both in person and virtual. The in person part is August 6th to the 8th at Lincoln Center which then it switches from August 9 to 22 to the SVA theater on 23rd street in Manhattan.  For a full list of what is playing where and when go here. The virtual portion is being hosted by Lincoln Center and the information can be found here.

Because I am still seeing films I can only give you a few recommendations. However be assured reviews will be running all the way through the fest.

If I may suggest why don’t you try

JOINT- a man getting out of prison wants to start up a tech company but needs money so he has to turn back to the yakuza. It’s a great thriller. This is old school NYAFF

UNDER THE OPEN SKY- is one of the absolute best films of this year  and its about a an older yakuza member who wants to go straight. It will move you.

SNAKEHEAD is a killer thriller about a woman trying to find her daughter in New York. (this is also playing the  Asian American International Film Festival)

JUNKHEAD is a wild animated film that will mess you up

TIME- is the sort of off kilter charmer than helped NYAFF get its world wide reputation.

Email ThisBlogThis!Share to TwitterShare to FacebookShare to Pinterest
Labels: nyaff 2021