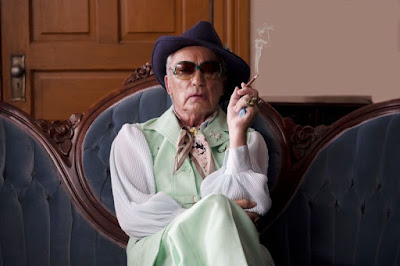 If there is justice in the universe Udo Keir will get an Oscar for his performance in Swan Song. This is the story of Pat Pitsenbarger who is a former hairdresser, drag performer and hell raiser who is now living in a nursing home, the result of a stroke. Now he spends his days talking to the residents and sneaking smokes. When he is asked to do the hair for Rta, a former friend, who passed away, he hesitates and then decides to do it and heads off on one last grand adventure.

Rough raw, imperfect Swan Song is a masterpiece. A stunning portrait of one man  the imperfections of the film reflect the imperfections of the man and we fall more in love with it and him. Its rough and tumble and all over the place as Pat drifts in and out of memory and the hear and now. Past and present get jumbled as new friends mix with old and ghosts come to call. I was deeply moved.

The reason that the movie works is Udo Keir. Keir gives a performance of the ages. Yes he has big showy moments (pick any moment when he leaves the nursing home)  but it’s the small ones that shine. Watch the small moments, the small gestures that are full of kindness and love. He is a force of nature on every level and he inhabits the role to the point you can see him in Keir’s eyes.

I was moved frequently. Some times it was joyous moments, some times it was bittersweet moments, such as when Keir was told by Rita's, nephew that she was fine with him being gay because her best friend (keir) was brought tears to my eyes.  Keir gives a performance for the ages.

And lest you think he’s acting in a vacuum, he’s not. Everyone else from top to bottom is perfect and disappears into the role. I love the kid who is the bar tender at the drag club and the woman who was the nurse at the nursing home. I didn’t recognize Linda Evans in her brief role and even Martha Coolidge took me a few minutes to come to mind.

I love this film. Yea the plot is more an after thought but as time with a character and a wonderful soul this is time well spent.