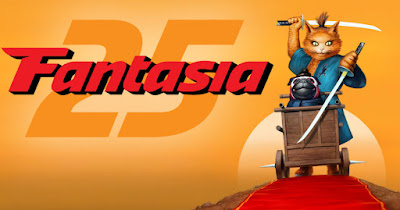 Fantasia Fest starts  this week and the world is better for it.

Yes this years annual survey of insanity from across the globe hits theaters in Montreal and the interwebs starting Thursday.  As you can see the fest is doing a combination of in person and virtual screening.

With apologies to the festival, where I normally wax poetic about the fest for several paragraphs this year I am way way behind in watching and writing up the films I am seeing so instead going to give you some lists of films.

First up a list of films we have previously reviewed

Because there is an overlap with NYAFF  I want to say that the following film reviews will be dual branded because they are playing both festivals. Because I saw them through the good graces of NYAFF I am posting the reviews according to their schedule  thus seeming to put me in conflict with Fantasia embargoes (I am but I'm not)

And lastly here is films I highly recommend

I will be running an interview with the director and star of CATCH THE FAIR ONE this week. It was done for Tribeca but was only recently transcribed.

Email ThisBlogThis!Share to TwitterShare to FacebookShare to Pinterest
Labels: fantasia 2021