Filmmakers You Need to Search Out Part 3

With three festivals going this week I've shortened this week's addition to the list of films you need to search out since I've been watching too many films..... 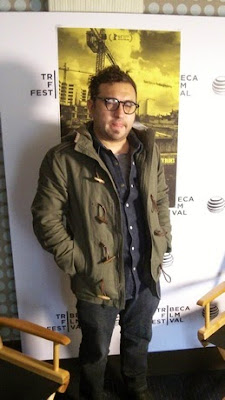 I discovered Alonso Ruizpalacios at Tribeca when I saw his film GUEROS and was floored by it. It was a ballsy act of filmmaking that resulted in my interview with the filmmaker because I had to see who had the mad idea to make the film.
I love Jason Kartalian's films. He is one of my favorite filmmakers. He makes me laugh and he makes me think. Most importantly he makes m fall in love with the movies all over again. His two films on Jeff Leroy are two of the best films on films you will ever see.
Anad Jodorowsky is the son of Alejandro. His short film THE VOICE THEIF is a masterpiece that heralds a new generation of cinema masters.
Alec Kubas-Meyer is a friend. He writes for Unseen Films. He also makes killer films. His REEL, MIRANDA and NOT TOO YOUNG reveal a filmmaker who needs to be turned loose on a feature film. I know he is doing reviews on You Tube but he needs to be making movies because we need to see what he has cooked up.
Jon Kasbe is one of the greatest cinematographers I've ever run across. He is also one of the greatest documentary filmmakers I have ever run across. His shorts such as MIPSO IN JAPAN, HEARTBEATS IN FIJI and BEAUTIFUL WASTE rock and his feature WHEN LAMBS BECOME LIONS will make you rethink how you view poaching.
Bryan Reisberg's BIG SIGNIFICANT THINGS  was his first feature and it heralds the arrival of a director with a wonderful world view. I want to see more.
CRUMBS was Miguel Llansó's first film and it was a film that changed the way I see the world. His follow up JESUS SHOWS YOU THE WAY TO TH HIGHWAY was confirmation that he is the real deal and someone you MUST track down.
I discovered Sudhish Kamath when I covered the crazy film X: PAST IS PRESENT which had multiple writers and directors but still worked. His follow up SIDE A SIDE B is a mix tape romance. His films shake up forms and make us see what can be done is different than what we thought. Thy are also wonderful.
AND a word of warning I will be skipping a week or two of this list. The lists are done but with NYAFF, Fantasia, Bentonville and AAIFF all playing in the next two weeks there will be heavy drops of reviews and I don't want the filmmakers on this list to get lost.
Posted by Steve Kopian at August 01, 2021