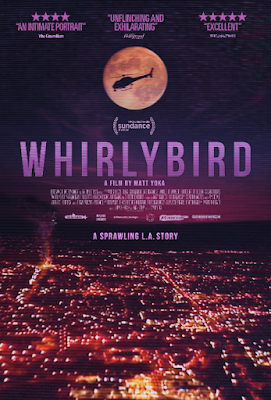 Whirlybird threw me off at the start. I initially thought this was going to be a straight forward look at one couple’s reporting in Los Angeles, however after a short time it morphed into a look at the history of TV reporting and then it morphed again into a story of the couple at the center. What I thought was a simple story suddenly had a refreshing complexity

I really liked Whirlybird. It’s a compelling story that transcends it simple set up to be a something more than your typical film. This tale of Zoey Tur and her then wife Marks Gerrard is something special. It’s a film that does what any great film does, which is takes something we think we know and instead turns it on its head and shows it to us in a new way while giving us people we can care for.

This is great filmmaking and when I was done with it I emailed several friends to tell them they should make an effort to see it.