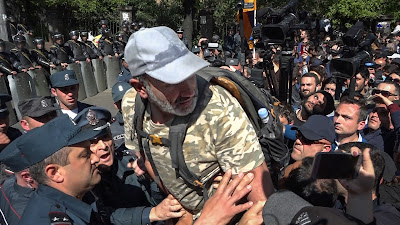 I AM NOT ALONE is a thrilling film. The story of how Armenian activist/political prisoner /politician/ journalist Nikol Pashinyan toppled the status quo in Armenia is a tale for the ages. It is beautifully told (unexpectedly) by all the parties involved.

After two terms as president strong man Serzh Sargsyan moved to make the position of Prime Minister the more powerful position with an eye toward moving into that position when his second and final turn as President was done. He had been put into power by brutally squashing protests that happened after his rigged his election. Pashinyan decides that something had to be done he decides to protest by walking to the capital and holding a rally in Liberty Square. The idea is that his walk would motivate the masses…and what happened was entirely unexpected in the best possible way.

Recounting the fourteen days of the walk across Armenia and then the subsequent events in the capital I AM NOT ALONE shows us the power of what one good man working as an agent for the good of his people can do. A nail biting story that will keep you on the edge of your seat as events twist and turn in ways that are completely unexpected. While I knew how it came out, I never expected any of the tits and turns and as result was absolutely delighted.

The truly amazing thing about this film, and which lifts it up to the realm of truly great, is the fact that the filmmakers don’t just interview Nikol Pashinyan, but also former strong man Serzh Sargsyan, as well as the chief of police who sought to end the protests plus many others on all sides. This is a well balanced film where everyone gets to tell their story and we are so much better for it. The result is a stunning film that will make you shout and perhaps even shed a tear.

One of the best films at DOC NYC. A must see

I AM NOT ALONE plays November 10. For more information and tickets go here
Posted by Steve Kopian at November 07, 2019