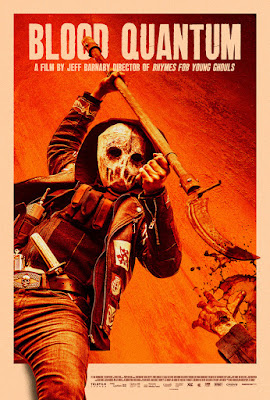 Zombie immunity is an idea that’s been toyed around with before in zombie media, but perhaps never as directly as in Jeff Barnaby’s Blood Quantum. The idea is simple: what if First Nations peoples—and only First Nations peoples—were immune from the zombie virus during a zombie apocalypse? Suddenly the same white people that killed their ancestors and eradicated their cultures must rely on them to survive. It’s a reversal I’m somewhat surprised hasn’t been explored before, as it offers opportunities for the same kind of social commentary that George A. Romero made with his Living Dead franchise.

Shot mostly at the Kahnawake and Listuguj reserves in Quebec, Canada with a primarily First Nations cast and crew, Blood Quantum represents a new kind of indigenous genre cinema. However, the film itself is a mishmash of cliches and boring stock characters. Its main flaw is its structure, as it feels like the pilot and finale episodes of a television series like The Walking Dead. The first half-hour sets up all the major and bit players in the moments leading up to the initial outbreak—“Z-Day,” if you will. They’re all characters we’ve met before in one way or another, all moody parents and authority figures and angst-ridden teenagers with their own emotional demons. They’re so collectively dull that they grind the first act to halt as they putter around their community and monotonously mutter about this and that. It’s only after the first act ends and the story jumps ahead six months that the film snaps awake.

Now all the characters live in a post-apocalyptic compound guarded by hockey mask-wearing fighters armed with chainsaws, shotguns, and, in one incredible instance, a samurai sword. The immune First Nation survivors struggle to keep the peace amongst themselves and the white survivors as they fight off the “zeds,” and it’s here that we can appreciate the film’s striking visual design and the eclectic supporting cast. (Fans of Jim Jarmusch’s Dead Man [1995] will be delighted to see Gary “Stupid F**king White Man” Farmer show up as Moon, the compound’s axe-bearing enforcer.)

But the story is so tired and perfunctory in its beats that we can follow it with our eyes closed. Blood Quantum may be the one of the first indigenous zombie films, but we’re going to need at least one more to get it right.
Posted by Steve Kopian at June 01, 2020