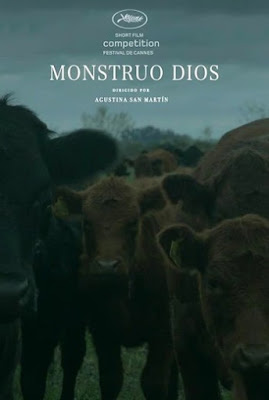 I saw MONSTER GOD several months ago. It was originally supposed to play NYC's New Directors New Films which is in many ways the most art house, in the good and bad ways, of any festival that plays New York City each year. The films are very much of a type and with very rare exceptions never really vary travel from the art house to the mainstream. There is nothing wrong with that and every year I find some real gems but it also means that every year that I will see a few films that wash over me and don't make much of an impression beyond the visuals.

MONSTER GOD is a painfully beautiful short film about kids, cows and an ever present power station.

What it means is anyone's guess...

Then again I really don't care because the images in it are so stunning that I want to take every shot and hang it on my wall.

MONSTER GOD plays the We Are One Fest starting tomorrow. For more information and a link to where you can watch it go here.
Posted by Steve Kopian at June 01, 2020

Email ThisBlogThis!Share to TwitterShare to FacebookShare to Pinterest
Labels: ndnf 2020, short, We Are One