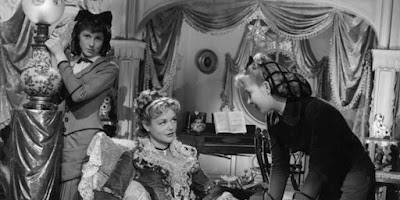 The film follows the amours of Olivia (Marie-Claire Olivia), a new student at a boarding school run by two rival headmistresses. The first, Miss Julie (Edwige Feuillère), reigns with the noblesse oblige of a monarch, doting on her favorites and inviting them to her chambers for evening readings from Jean Racine’s Andromaque and other classical tales of love won and love lost. The second, Miss Cara (Simone Simon), is a perpetually debilitated flirt with chronic migraines who holds court with a gossipy clique of students around her sickbed. Eventually Olivia falls into a love triangle with them both which threatens to transform into a love quadrangle with the sudden return of Miss Julie’s former favorite pupil Laura (Elly Norden).

Handled differently, the material could’ve been adapted into a dark psychological thriller à la Alfred Hitchcock’s 1940 adaptation of Daphne du Maurier’s Rebecca (especially when it’s revealed that Miss Julie may or may not have been acting on predatory “impulses” with other students). And, indeed, there are moments where the set design borders on the expressionistic—as the film progresses Olivia’s bedroom seems to morph into a Miss Havisham cocoon with bed draperies hanging like so many spiderwebs. Additionally, cinematographer Christian Matras’ camerawork dips and weaves, pans and tracks like a less opulent imitation of Audry’s contemporary Max Ophüls.

But Audry’s approach was primarily mannered—nearly suffocatingly so—occasionally bordering on the naturalistic. In this, it seems to borrow from Leontine Sagan’s Mädchen in Uniform (1931), a Weimar-era drama that was also about lesbian love in an all-girls boarding school. (Perhaps not incidentally—it’s reported that Sagan’s film left a great impression on Bussy and her work.) But Audry also attempts to keep the material from getting too dour with the injection of some rather odd comedic relief, chiefly in the form of the perpetually ravenous math teacher Miss Dubois (Suzanne Dehelly). Truthfully, it’s a welcome respite.
Posted by Steve Kopian at June 03, 2020