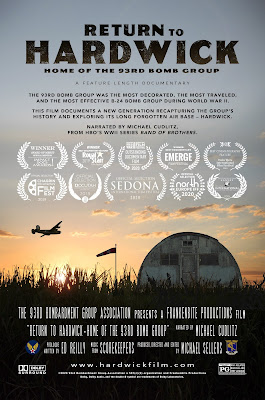 Portrait of the 93rd Bomb Group who flew out of the Hardwick Airfield in England. More specifically it is the story of the survivors, their family and friends who return every year to the airfield to celebrate and honor the achievements of the men and woman who served their country.

Good little documentary of a group of people trying to keep the story of the 93rd alive. The group flew the most mission of any other unit in the war and their story needs to be told.

What I like about the film is not so much the straight history but more the human story of the meetings. I loved the small stories floating the survivors and their families such as the the man who is trying to get closure for his family over the death of his uncle who dies in a plane crash. By joining the Hardick group he not only found friends but was also able to get more pieces about what happened.

This is a sweet little film. It is a nice tribute to the soldiers and their families and is definitely worth a look for anyone interested in the lives of those called the Greatest Generation
Posted by Steve Kopian at June 07, 2020