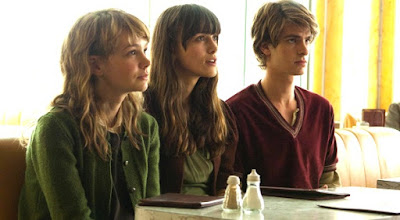 In the alternate timeline of Kazuo Ishiguro’s 2005 novel Never Let Me Go, mankind perfected the art of cloning around the middle of the last century. The breakthrough led to a medical revolution effectively curing all known diseases. The catch: cloning doesn’t actually cure the diseases, it merely allowed the creation of an endless supply of clones bred, raised, and harvested for their healthy organs. The result was an invisible underclass of clones raised by the state as human cattle, kept largely out of sight and out of mind from the larger populace.

The more you examine Ishiguro’s dystopia, the more preposterous and nonsensical it becomes. For example, wouldn’t millions of clones be needed to reliably stamp out diseases in the general population? And if so, why does the film never imply that there are more than a handful of schools in all Great Britain producing maybe a couple thousand “donors” at once? Ah, but Ishiguro deliberately keeps the details of his world at arm’s length, as he treats it merely as the means to explore themes of despair, the existence of the soul, and doomed love as he tells the story of the tragic love triangle between Kathy, Tommy, and Ruth, three “donors” growing up at an experimental boarding school named Hailsham. Characteristic of Ishiguro, the novel is an exploration of not just love and loss, but memory, as it’s largely told through sprawling, nonlinear flashbacks.

Alex Garland mostly did away with this structure for his screenplay adaptation that was eventually filmed by Mark Romanek in 2010 using the same name as the book. Garland presents the material as one primary flashback told linearly, following Kathy (Carey Mulligan), Ruth (Keira Knightley), and Tommy (Andrew Garfield) as they grow from children at Hailsham to young adults at a farm to “donors” wandering the purgatory of hospital hallways and operating rooms. This change might offend literary purists, but Garland brilliantly maintains the book’s tone and the elusiveness of its setting. Like Ishiguro, Romanek and Garland put the primary focus on the characters, logical sci-fi world-building be damned. The result is a painfully sorrowful wail of a film, stunning in its beauty and reserved melancholy. Much of its power comes from its central performances, and though Mulligan’s is the cornerstone upon which the whole film rests, it’s impossible not to recognize Garfield’s star-making turn as the mentally tortured Tommy.
Posted by Steve Kopian at June 07, 2020