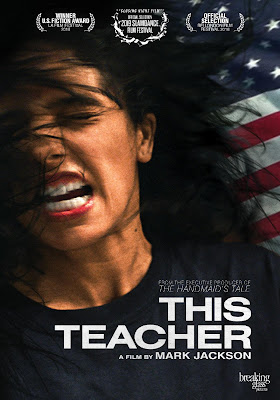 French Muslim needing a break travels to New York to visit a friend and is shocked by the changes living in America and dealing with the casual racism have made in her friend. Feeling out of place she flees to the country but even alone in the woods there are somethings she can't escape.

Good looking, beautifully acted and very deliberately mannered THIS TEACHER is going to be a film that you either fall in love with or find much too calculating. I'm in the later having never fully connected with the film from the first frames when Hafsia Herzi stares into the camera before repeatedly saying "I'm Here" to the person on the other side of the phone. It's a statement of fact for the character and a statement of intent for the film which then paints a portrait of how Herzi is marginalized.

I admire what the film is trying to do, I just never warmed to it's artificial construction.
Posted by Steve Kopian at June 07, 2020