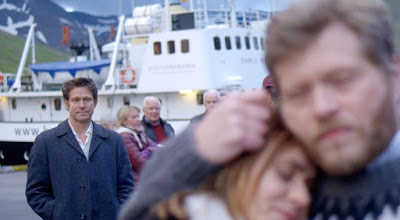 This okay thriller never caught fire for me. I am not certain if it is because of the unevenness in the acting (some of the acting is better in some languages than in others) or because there really isn't much here. The problem for me is the events feel stretched out, with turns like one of the characters being a peeping tom, feeling like it was put there just to keep things interesting. In a weird way the whole film feels like it the reporters initial story, it was supposed to be one thing and then it became something else in order to justify its existence.

While never bad it never fully engaged me. Yea I wanted to to find out how it ended but I was already looking for the next thing by the time it ended.

Playing for free at the Brooklyn Film Festival, details on how to see it can be found here.
Posted by Steve Kopian at June 01, 2020