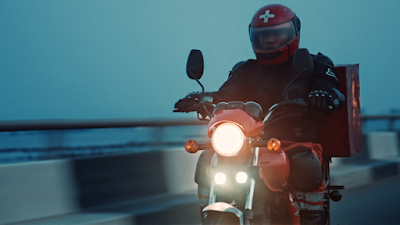 Jon Kasbe hits it out of the park again with BLOOD RIDER, a portrait of Joseph, who races blood to where it is needed in Lagos. Nigeria via motorcycle.

Actually the film is about Joseph and Deborah a woman expecting her first child who will need the blood Joseph can provide. I mention this because much of the second half is Deborah having a difficult delivery and Joseph rushing the life saving blood to the hospital. And before you chastise me for giving anything away, I'm not. You can pretty much guess from the set up as to how it is going to go but it doesn't matter because what Kasbe does is to make you want to cheer for this real life superhero.

What makes Kasbe's film so compelling is the craft in the filmmaking. Kasbe is one of the greatest filmmakers working today and he simply knows how to tell a story. More importantly he know how to win friends and influence subjects to the point that Kasbe gives us an incredible sense of intimacy with his characters. We are right there on the motorcycle and in the delivery room. Kasbe somehow  managed to have Deborah and her husband allow him to not only film her at a time of incredible stress but to do so up close and personal. It boggles the mind.

Kasbe's telling of the Joseph's tale is truly heroic. Joseph is a real life superhero saving lives and Kasbe makes damn sure we know it by doing everything short of having him wear a cape. More importantly the line of silliness is never crossed. Joseph is always a man doing extraordinary things. We marvel at what he is doing via perfect marriage of sound and image.(The score maybe one of the best I've heard all year)

As a long time fan of Jon Kasbe I am continually amazed at his ability to take a subject and do unexpected things with it. From sewers to bluegrass bands to ivory poachers, Kasbe makes films that make us think about things that we think we know only to have us realize we don't. To say that Jon Kasbe is one of the best directors working today is an understatement, he is, with no attempt at overstatement or irony, undoubtedly one of the greatest I've ever had the privilege to run across.

BLOOD RIDER has premiered at the WE ARE ONE FEST  and can be screened here until June 7
Posted by Steve Kopian at June 01, 2020

Email ThisBlogThis!Share to TwitterShare to FacebookShare to Pinterest
Labels: biography, documentary, Jon Kasbe, Nigeria, short, We Are One