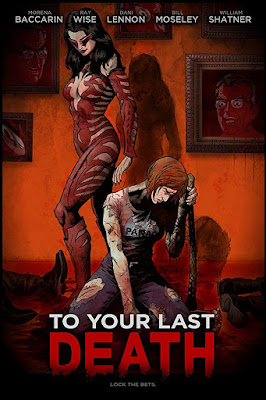 Miriam Dekalb (Dani Lennon), an activist for P.A.N.A.C (Peace and Non Violence Action Committee, must take on her abusive father, Cyrus, (Ray Wise) owner of Dekalb Industries. He and his accomplice known simply as Gamemaster (Morena Baccarin) are known for putting the lives of humans in jeopardy to satisfy their blood lust. In order to save her siblings, Miriam must outsmart them both and beat them at their own game.

To Your Last Death artist Carl Frank (Magic: The Gathering) uses an impressive combination of both comic book art and 2-D animation which are meant to create a graphic novel appearance. The visuals are spectacular, with the artwork being similar to what you’d find in the adult animated series Archer.

The choice of having William Shatner lend his voice to this project as The Overseer was a brilliant choice that really ties the entire film together. I found myself being enthralled with this story. Although the characters are animated there’s a human type quality to them that makes them relatable.

Gamemaster and Miriam are my favorite characters. They each create a unique balance between good and evil. The action sequences and high powered gore scenes work so well within this medium. If this were a live action film I don’t think the quick paced atmosphere would work nearly as well.

I love a story that keeps you on your toes and this one certainly does. Within the first 25 minutes of the film there are so many surprising twists that I wasn’t prepared for. If you aren’t a fan of slow burn films, and you want something that grabs your attention immediately, this film should definitely be on the top of your must watch list.

I’d recommend To Your Last Death to anyone who is a fan of horror and animation. This is such a strong and unique story that I think it deserves a 10/10 rating. The amount work that went into creating this movie is incredible. There was so much drive and determination by everyone involved. Writers Jim Cirile, Tanya C. Klein and Director Jason Axinn did a fantastic job and I look forwarding to seeing more from them.
Posted by Steve Kopian at October 02, 2020