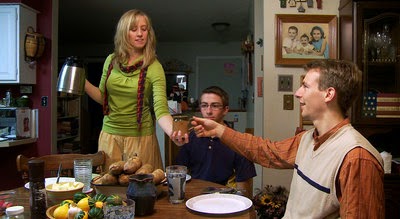 A COURTSHIP takes a look at the courtship movement in America. The movement  looks to have couples chosen by the fathers of the women. There is no dating in a secular sense, the couple is brought together in asuch away that the first time they kiss is at the altar on the day they are married. The film focuses on 33 year old Kelly, a good Christian woman who lives with the Wright family. The Wrights are helping Kelly try to find a husband, in particular navigate her relationship with a young man named Ross.

I'm trying to work out how I'm supposed to feel about the courtship movement and the people involved. There is no doubt that Kelly is a sweet girl and the Wrights are nice people, the problem is that to my New Yorker's eyes they come off as really silly and behind the times. They come off as so backward that the screening I attended was filled with some of the loudest laughter of any Tribeca screening I've ever attended. While there is no question that people need to believe whatever they like, some of the ideas expressed about women giving up all thought of their own lives brought disapproving laughter from the attending audience.

About a third of the way in the film the personality of the film's subjects takes over and we are more accepting, some of the twists and turns still come off as silly for example Kelly's happiness is ultimately determined by a question of semantics as it's not a question that even in God's perfectly ordered universe bad things happen the question is does god simply allow it or does he cause it.  After the film Hubert, Alec and myself tried to unknot the thorny subject and determined that they were ultimately arguing the same point.

I have no idea how I'm suppose to feel about the film, nor do I know how this is going to play in Peoria.  Certainly the film is a good one. It holds your attention and keeps you interested but at the same time I'll be damned if I know if I'm laughing at the people in the film or with them. There is no indication as to the directors intent, on top of that if you are a believer the film is going to be less silly than if you are an believer. Likewise if you don't see women as a man's property then you're going to have a different take then if you do.

One of the more entertaining films at this years Tribeca Film Festival, A COURTSHIP will give you much to ponder.
Posted by Steve Kopian at April 30, 2015