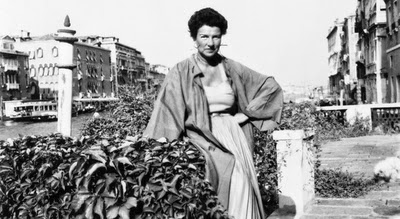 Easily one of the top three films at Tribeca this year PEGGY GUGGENHEIM ART ADDICT is that rare bird film, an informative documentary that is also highly entertaining.

This is the life and time of Guggenheim, niece of the man the museum is named after, as told by the woman herself via recently rediscovered tapes. The recordings were done for a biography and were believed lost. Amazingly they recently turned up and we are so much better for it. the film covers Guggenheim's entire life and it explains why she is so important to the art world-she championed many of the surrealists and abstract artists that now are considered the most important artists of the last century. If you need to know how right she was in what she did consider the Louvre told her at the start of the Second World War that her art collection wasn't worth saving, however after the war they wanted to display it.

Not only do we get to hear one hell of a life story, but we also get to see a history of art with paintings as big as a movie screen. Its a frequently overwhelming visual experience.

I know that there is more I should say, but I don't see the point. What ever I could say will pale with anything you feel after you see this most wonderful film. I will say it is most certainly one of the three best films of Tribeca and one of the best year.