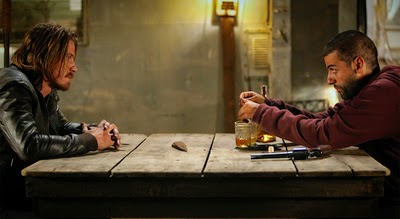 Despite being blessed with endlessly quotable dialog and a great performance from Oscar Isaac, William Monahan's MOJAVE is a mess. Its such a mess that the PR person I spoke to after the screening looked like she had been bludgeoned with her own leg after she heard all the negative things that people had been saying about it.

The film begins with an actor played by Garrett Hedlund fleeing into the desert (don't ask why we don't know). He meets drifter Isaac and instantly gets on his bad  side. Isaac is a psycho who follows him. After Hedlund accidentally kills a sheriff and flees back to LA, Isaac pursues, cracking wise all the way.

Beginning about a reel and a half into the story and driving onward with no intention of explaining anything the film gets nuttier and nuttier as bodies pile up and WTF lines are uttered. While I can understand Isaac and his insanity (its a great performance) the rest of the cast is saddle with characters that make no fucking sense. I mean that these people just do things and behave weirdly. Then there are the weird twists that make zero sense such as Isaac finding Hedlund via the registration for a car that's a rental. Who wrote this an ADD tree stump with half a brain? Its infuriating and after a while I started laughing at the film and watching it with wide eyed wonder at how wrong it was going.

If you can surf the great small moments I'm sure you'll love it, but as a film and not moments the film is one of the biggest god awful messes of the year
Posted by Steve Kopian at April 26, 2015