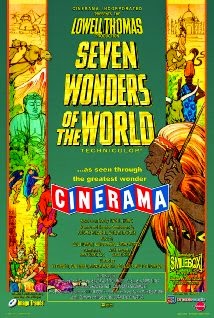 Lowell Thomas sends the Cinerama cameras around the world to see the modern versions of the Seven Wonders of the World. Its a spectacular trip and makes for one of the best Cinerama films ever produced.

I don't know what to say but this film is great and the restoration by Flicker Alley is amazing. Its so good that when it was done I started the DVD all over again.

The wonders we see run the gamut from temple in Japan, the Taj Mahal, the Holy Land, Africa, Angel Falls,  to the wonders of AMerica. There are several stunning sequences including a runaway train in India, a flight into a volcano and some other things my poor little brain didn't register.

This is spectacular and the only thing better than cracking the DVD open for another go round would be getting the chance to see this on a big screen.

One of the best Cinerama films.
Posted by Steve Kopian at April 11, 2015