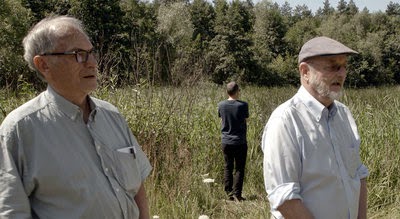 Philip Sands a human rights lawyer talks to Niklas Frank and Horst von Wächter the sons of Hans Frank and Otto von Wächter two high ranking Nazi officials responsible for killing millions in Poland during the Second World War including 79 members of Sands family. While Niklas was damned his fathers actions, Horst holds out that his father was a decent man because there are "no" documents saying his father killed anyone.

While there have been any number of films looking at the sins of our fathers during the War, none have had the pair of Niklas and Horst, two absolutely riveting characters. The give and take between them and their strange psychological make ups make for must see viewing.

Niklas makes no bones about what a horrible person his father was. Lacking for parental love, his father thought he was his mother's lover's son and kept him at arms length and his mother had no use for her children, Niklas throws his father under the bus along with any other Nazi. He's a realist and knows what his father did and he's sorry for it.

Horst on the other hand is clearly bothered by events, but he can't admit his father did bad things holding out the lack of a real paper trail, the fact that his father never actually killed anyone and the fact that some people, even now say his father was a decent man. His gyrations go from laughable to pathetic as his insisting on believing what he wants cracks his friendship with Niklas.

I really like this film. What I like is that this is something we haven't really seen before- a debate about memory and truth and the refusal to see it. I like that the film has long sequences such as the public discussion in London or some of the time sequences in Poland where the cameras simply record the discussions with minimal editing. Even though it makes for some bumpy viewing and an occasional feeling of over length during a segment, the over all effect is to deepen our understanding of why people feel as they do. Horst isn't as clear cut in his beliefs as we might think. We understand why he feels like he does and on some level why he won't change his mind (part of it has to do with his dislike of the way Niklas hates his father)

Is the film perfect? No, its occasionally bumpy, but at the same time the film manages to kick up some interesting material on an over done subject. Definitely worth seeing on the small screen if nothing else.
Posted by Steve Kopian at April 20, 2015