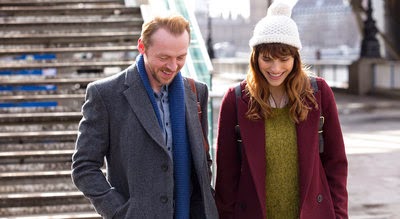 Nancy (Lake Bell) is 34 and bitter. Her romantic life is in shambles and she is incapable of finding a nice guy never mind the right one. When a set up date at a party fails she takes the train home. On the train she meets a younger woman heading off to meet a guy on a blind date. They are suppose to meet via a book. Through circumstance Nancy ends up meeting Jack (Simon Pegg) who thinks that she's the other girl. Deciding to go with it the pair ends up falling for each other but will the truth hurt the romance?

This film blindsided me. Once Simon Pegg shows up I was utterly charmed and found this to be one of the most enjoyable films I'd seen at Tribeca this year.

There are a couple of really important statements in those sentences:

First I was blindsided because frankly I had no intention of seeing this film. Simon Pegg has had a very uneven time at the movies and I thought this was going to be a miss. However there was problem with a film during the pre-fest and the shifted stuff around. Since I was there anyway I figured I'd stay and see the film. Unexpected delights like this is why I love Tribeca.

The enjoying it once Simon Pegg shows up is also important because until he does I was ready to walk. Lake Bell's Nancy is a kind of an asshole. Her bitterness has made her loud and abrasive and you completely understand why no one would want to be around her. Once Pegg shows up she softens and he acts as a counterpoint to her vulgar behavior, The chemistry works in spades.

I really liked this and I laughed and got teary even though the film hit several cliches along the way.

Probably of interest to no one walking out of the film I found reaction was mixed along age lines. Some of the younger writers, in their early to mid twenties found it funny, but they thought some of the twists and turns unreal. People don't act like that. On the other hand people in their thirties or older liked it more. What I found listening to the three or four conversations in the lobby and on the street was that the people who really hadn't dated or been in a long term relationship couldn't relate as well as those who had. It gave me the feeling that those who didn't like it now will be falling in love with it later.