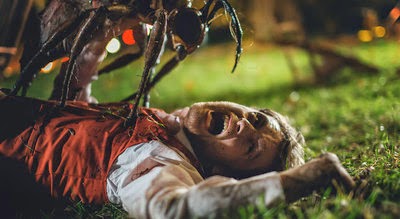 Best of the Midnight film section at Tribeca this year STUNG is a lot of fun.

The premise of the film has a nest of giant wasps wiping out a dinner party in the country. The survivors take refuge in the big manner house- but are slowly whittled down by the wasps.

After a first 15 minutes which hits every cliche imaginable the film goes off the rails into new territory as the wasps attack. The battle with the wasps lasts the rest of the movie and is a bloody gruesome delight. Nothing goes as expected and all of the nastiness is done in such away that you'll either laugh or wince-sometimes both.

This is like an amped up SYFY original film with way more genuine scares, gore and lots of profanity.

The best thing I can say is if you love monster movies this film is going to become one of your new favorite films.