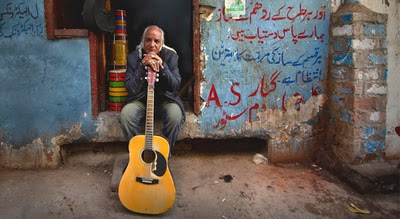 One of the must see films at Tribeca  SONG OF LAHORE is a glorious portrait of the  a group of musicians centered around Sachal Studios in Pakistan who are trying to keep traditional music alive in their country.

Back in 1977 when a military coup brought a pro-Islamic state leadership music was frowned upon  driving the musicians into other professions. Some continued to play but by the time that things begin to thaw the traditional way of making music was forgotten. Hoping to find an audience via CD releases the artists began to record for Sachal. However since the market for their music they tried something different and recorded some jazz infused songs including Dave Brubeck's Take Five. The BBC did a story and things got crazy and the group was invited to Lincoln Center to play with the Lincoln Center Jazz orchestra.

Wonderful film about bunch or musicians doing what they do and struggling to share it with the world, or even just their own city, will make your heart soar. Full of great characters, marvelous discussions and amazing music this is a film that will make you want to get up and dance. I think someone behind me at the press screening started to applaud during one of the performances. I'm also pretty sure that everyone in the screening room was having a good time because when I turned around at one point everyone was smiling.

The film isn't all light and fluffy music. There is a great deal of seriousness as some forces in Pakistan  seek to stop music being played. The more extreme radical elements are killing musicians and destroying instruments in order to stop it being played. Things are so bad that concerts have to be performed with heavily armed guards in attendance. Its not a happy scene and it gives you a great deal to consider.

As dark as the political climate is, its the music that shines a bright light in the darkness. Watching the men perform in Pakistan put a smile on my face  that only got bigger when we got to see them in NewYork wandering around the city and playing at Lincoln Center. I think the term is way cool.

One of the must sees at the festival.
Posted by Steve Kopian at April 18, 2015