Form over content film will either thrill you or make you walk out of the theater, as several did during the course of the screening I attended. The problem isn't the central story line, its everything that's hung on it. 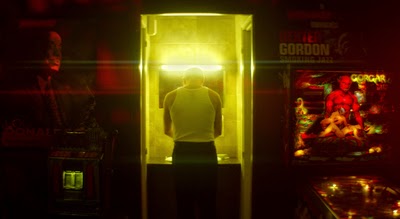 This neo-noir film concerns Stelios, the owner of a jazz club up to his eyeballs in debt to a Romanian gangster. Its 2010 and the Greek economy is tanking big time. There is civil unrest and for many it seems to be the end of the world. Stelios is informed by the gangster he has until Wednesday at 445am to pay him back or else he's going to have the club taken from him.  With nothing to lose Stelios tries to get the the money together.

All of that would be good except the film throws in a parallel story about an Albanian strip club owner also in debt, Stelios' failing marriage, his drug problem and his hallucinations. It makes for a crazy mix that ultimately doesn't make a lick of sense.

The problem is that in addition to being a film noir the film also wants to be a social satire on the Greek Economic crisis and everything seems to be a running commentary on that. Not being versed in what happened other than in generalities I felt like I was missing stuff. It would have been okay if the film hadn't been hitting us over the head with it, but it does and I kept feeling there was a deeper meaning.

The film also suffers from being very much in Stelios's head. The film is pretty much from his POV and  the result is a disjointed telling as sequences bounce around, people repeat whole sections of dialog and we're treated to the constant sound of ticking. This is very much an art film.

On the plus side the film does have some dynamite set pieces, in particular all the ones involving violence are extremely kick ass and the it's very likely that the final one as well as the one outside the restaurant will end up riffed on and discussed by action aficionados for years to come.

I don't hate the film, less so after having a long discussion with Joe Bendel on the way out of the theater, but I still don't love it. Yes the film has moments and is very good if you forget that nothing makes sense, but at the same time I kept wanting to yell at the director "what the hell are you doing?"

I've read the press notes and had several discussions now and I still don't know.
Posted by Steve Kopian at April 26, 2015