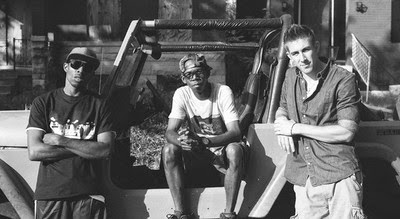 Billed as a comedy drama CRONIES is more drama than comedy. While it has several laugh out loud moments the film is really more a drama about three guy driving around the hood.

The film is a mixture of interview footage and footage of the guys hanging out. In the interviews the director talks to the characters about their lives and the other characters. The director is supposed to be a radio host looking back at some event ten years earlier.The actual plot of the film has Louis planning the his daughters birthday with his girlfriend. Just as he is supposed to be picked up by his friend Andrew who owns the car dealership/car wash where Louis works Jack shows up. He's a talkative young man who likes to smoke weed and walk on the wild side. All three guys head out nominally to get a gift for the party the next day, however they don't pass up a chance to party...and deal with the aftermath of Jack killing Louis's father ten years earlier.

When CRONIES started I was kind of distant to it. The film looked like any other inde black and white film fused with Spike Lee-isms. The narrative portion of the film had the feeling that we had been here before any number of times and that this wasn't going to be anything special.  However as time when on and the interview portion of the film began to fill in details and give the characters depth the film began to grow and get better. To be certain writer director Michael Larnell's dialog could be wobbly and yes some of the plotting comes across as cliche, but the characters that he created are so well drawn that you really like them. You completely understand why Louis is friends with both --- and Andrew. By the time Louis talks about having a friend he knows for certain would kill for him we understand what that means. We also understand Jack's talk about how many of the bad things he's done were not malicious but done for the right reason Its a heart breaking moment.

Is CRONIES worth seeing. Yes it is. This is a small little treasure of a film that deserves to find it's audience. This is a film that needs to get noticed because I want to see what other characters Larnell can pull out of himself for us to see.

What frightens me is that two films past my seeing this film I had kind of already relegated the film to the fringes. Two films on I was already working on the next film. That is completely unfair. CRONIES is to good to be forgotten but sadly in a situation like Tribeca films like this are bound to get lost in the crush of 90 or so other films.

Do yourself a favor and go see CRONIES. There are a few more screenings left and go see it. It may not be the best film at the festival but it is still something special

For tickets and more information go to the film's web page
Posted by Steve Kopian at April 23, 2015