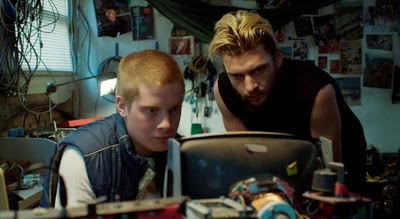 JACKRABBIT split the audience I saw it with into three factions- those that hated it and walked out or fell asleep, those that admired it pretty much every level except the pacing and the story and fell asleep, and then there was me. I apparently was the only one who liked it. Actually up until a certain point I absolutely loved the film…

…but I’m getting ahead of myself.

JACKRABBIT is set in a post-apocalyptic world. Some event called THE RESET 25 years earlier wiped out civilization. There is no electric outside of City 6, or cars or anything like we have now and they have there. There are hints of some sort of nuclear event and marauders. The city is controlled by a company called Vopo which works to keep everything running and contact with the outside world to a minimum. When a hacker is suicide (his murder made to look self-inflicted) his friends try to unlock the secrets of a computer drive he left behind.

An enigmatic low tech kind of cyber-punk thriller the film is a low budget throw back to some of the low-fi films of the 70’s and 80’s. There are riffs and nods to various earlier films including the Matrix, The Conversation and Besson’s Final Combat. It’s a world where technology stopped in the late 80s or early 90’s (Atari’s Night Driver is a home video game). To me it’s a beautifully constructed world that all makes sense.

The problems with the film comes from two places. First the film is slow. Things happen in their own good time. While I clicked with the pace which matched the speed of the world, many people around me were put to sleep. I can’t say that the pacing is perfect, it is slow, but for whatever reason it didn’t bother me.

The other problem with the film is the film is enigmatic to the point of annoyance. There are a lot of mysteries going on and motivations are not full explained (though in the end you know why) but there is a point, right about the time that one character commits suicide, that it becomes apparent that we are not going to be given all the answers, there simply isn’t enough time.

What put a couple people over the edge concerning the film was the end which intimated something., but didn’t really say anything. Not to be too spoilery but Max does find something but what that is is never revealed- it remains a MacGuffin all the way through and that pissed them off. If there had been a payoff, even a little one they would have liked it more. For me there was disappointment, but as I said I knew it was going to end weakly once the suicide happened.

To me this is an almost great film done in by it insistence not to reveal whats going on. I can completely understand why some will hate the film, but at the same time if you click in with its weird vibe you will be richly rewarded.
Posted by Steve Kopian at April 19, 2015