In brief:Thought Crimes The Case of the Cannibal Cop(2015) Tribeca 2015 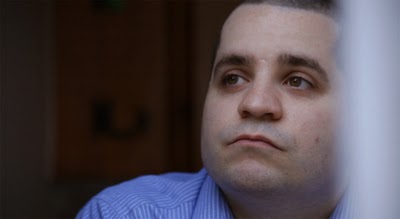 Having premiered at Tribeca and due to run on HBO on May 11 THOUGHT CRIME is a look at the cannibal cop case where Gilberto Valle, an NYPD officer was arrested and charged with plotting to kill and eat his wife and other women.

The film asks as a  portrait of Valle and an examination of the question of at what point do our thoughts become criminal. Its a question that is very important in this age of everyone throwing out all of their thoughts out in public via the internet. I don't know what to say. This is a good, if over long film that is sure to begin a discussion or six. You can't watch the film film and not have an opinion (everyone at Tribeca who saw it did).

As good as the film is there are a couple of things wrong with the film. Part of the problem is the editing which conceals certain facts about the case unfairly. How you think about the film hinges on when we are told certain pieces of information and the film doesn't tell you that what Valle did on the NYPD computer predated by months all the conversations about abducting women.  The juggling of the time frame deeply effects how the events are viewed.

The other problem is Valle himself. While he seems like a nice guy, its also pretty clear that there is something wrong with him. I got the feeling that had he not been caught he might have taken things even farther. He gave me the creeps and I couldn't really root for him.

Problems aside, this is definitely worth a look when it hits HBO on May 11
Posted by Steve Kopian at April 28, 2015