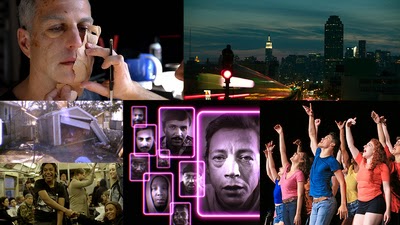 Excellent collection of shorts has several films which are among the best of all of Tribeca and the year.

BETTER TO LIVE- is a look at the NYU annual reality sketch musical show about various issues like, depression, being gay, self destructive, depression among other issues facing freshmen. A solid doc, it suffers by being compare to the other films in the collection and the sense it's just a long form public service announcement. Still on it's own terms its quite good.

LAST CALL has Sheldon Nadelman looking back over is time working at The Terminal Bar in mid-town Manhattan via the pictures he took of all his customers. Great stories mix with a kind of anthropological study.

MAN UNDER- I reviewed seperately. Its one of the best of the fest. Its a moving look at whats left in the wake of suicide by subway train

MANY SAD FATES OF MR TOLEDANO is a look at photographer Phil Toedano's project to take pictures of how he might end up based on genetics and psychics.. A very good look at how one man comes to terms with life.

WE LIVE THIS is a moving look at the kids who dance on the subway for change. Real life is heartbreaking but when they dance magic.

WHAT LIES BENEATH- Striking super 8 look at New York during super storm Sandy that transcends straight reporting to become a tale of the apocalypse. See this one as big as possible and get lost in the words and image.