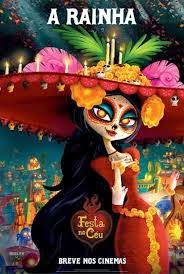 The plot of the film has a bunch of school kids going to museum where the tour guide tells them the story of Maria,Manolo, and Joaquin three friends who's fate is the subject of a wager between La Muerte who rules the land of the remembered and Xibalba who rules the land of the forgotten. If Joaquin marries Maria then they will switch kingdoms, if Manolo does then Xibalbacan no longer interfer with mortal affairs. What happens is the film.

I loved this film. I was completely blindsided by it. Yea I knew it looked great, but who would have thought it was this charming?

I could wax poetic about any number of things but there is two things I want to highlight, first is the use of music. I never expected the use of well known sings into the story. The use of Creep, I will Wait and Da Ya Think I'm Sexy work marvelously in context.

The other thing I loved was that the script keeps you on your toes. While you can be sure there is going to be a happy ending (its Hollywood boys and girls) how it gets there is surprising. Its so twisty that I had o agree with the kids in the film when they told the tour guide that it couldn't go the way it did. It could and it did- and the world is better for it.

Actually we need more films like this to prevent American animation from turning into an even more mindless waste land. Yea I know there are short film makers and filmmakers from elsewhere in the world, but many people don't watch the shorts or other countries animation unless its Japanese. We need films like this- especially when they are as good as this to assure that we get more great films.

One of the hidden treasures of the year. See it now.
Posted by Steve Kopian at April 08, 2015