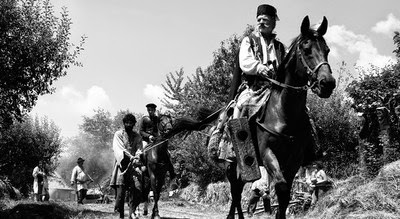 This film surprised the hell out of me big time. I thought I was getting depressing Romanian film instead I got a great adventure/slice of life.

Based on historical records AFERIM! is set in 1835 and follows a constable and his son as they leave to track down a runaway gypsy slave in Wallachia. We watch as the pair goes sets out on their trip, finds their goal and then heads home again . It's a film that could very well be called There and Back Again.

Shot almost entirely wide or medium shots (I think there is only one approximation of a close-up) the film is very much a film about space and distance and the landscape.  Where everyone is says a great deal about where they are in society. The distance also makes us outsiders. We are truly observers and not part of the action.

While very much it's own thing, the film echoes in many ways films like Tarkovsky's ANDRE RUBLEV or the work of Bela Tarr with long takes and little cutting within a scene. The film also isn't really what you would call an action adventure, there are no high points just life- and life goes on past the end of the film.

This is a glorious achievement. its a film that came out of nowhere as far as I was concerned and just worked me over. I couldn't look away, even though the film should on the face of it be something I wouldn't like.

A wonderful adventure in cinema. See it.
Posted by Steve Kopian at April 23, 2015